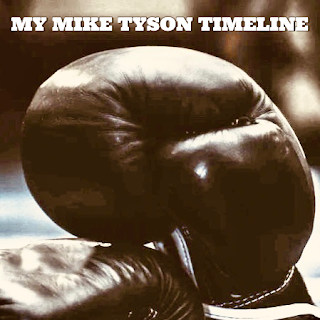 1. Was amazed by Mike Tyson’s young boxing fists smashing through skulls and knocking people out in like one minute. He didn’t just try to punch faces. He punched THROUGH faces like he was aiming at the backs of their skulls. It was shocking to watch that much extra brutality in a sport that crystallizes brutality. Plus I thought: I guess that’s how you win at anything in life — you aim beyond your goal, you punch THROUGH the skull.

2. Got crestfallen when Mike Tyson lost to Buster Douglas, and I kind of gave up on him — but I did tape the news headline “Douglas KOs Tyson” to my door, because my full name was Douglas so … BAM I knocked out Mike Tyson. (Not really.)

3. Loved that Mike Tyson bit off that Evander Holyfield ear. LOVED IT. Didn’t like Evander Holyfield. He seemed so pompous and phony, to me. And man I am so pompous on occasion. I should love a fellow pomp but I didn’t love Holyfield, because his whole better-than-thou act seemed like an act to me. For all I know, I was wrong and Holyfield is the next Mother Teresa and he’s saving baby dolphin orphans. I don’t mean to besmirch him. I’m just telling you my state of mind. I liked it when Mike Tyson bit his ear off. It was fun and funny and I was at a tiki bar in Florida when it came across the TV and my friends and I all drunkenly laughed about it on the beach for like two hours. Hilarious, mostly because I never respected the integrity of boxing in the first place. I am sorry though, Holyfield. Nobody should bite other people’s ears off. Not cool.

4. Disgusted by Mike Tyson’s rxxx case. Just utterly yucked tf out by it. (See next item.)

5. Saw the documentary where Mike Tyson said that even though he didn’t rxxx the woman he went to prison for, he took advantage of other women. Awful just awful.

6. Sat near Mike Tyson at a Prince concert at The Aladdin/Planet Hollywood. Mike Tyson left early. Prince played for like four hours and then some of us went to Studio 54 at the MGM to watch Prince do another 90 minutes in a secret private show. I had the best standing spot in the VIP section. I earned that spot, I was the best writer in the world, a legend in my own mind. Some woman kept flirting with me, trying to get me to invite her into the VIP area but I was sketched out by her overacted eagerness, so I ignored her. Big Prince night, though.

7. Felt super sad after Mike Tyson’s daughter died from that treadmill. What a heartbreaking tragedy. Made me glad I had a vasectomy. I couldn’t handle that. Mike Tyson is stronger than me.

8. Walked out of MGM casino show where everyone seemed to love Mike Tyson’s stage persona during his one-man play. I mean, it’s impressive when anyone can do a one-man play. But I don’t know. I just kept remembering that documentary confession of his about what he did to women and it made me feel weird hearing people applaud him now. I thought: Well, maybe he deserves a chance at redemption, but I’m going home, I shouldn’t have RSVPd, this is my fault for even being here.

10. This morning Mike Tyson is in the news because he allegedly hit some rando citizen in real life and it made me think about my life moments with Mike Tyson — the boxing greatness, the court case, the daughter, the documentary, the Prince show, the MGM show I bailed out on and … all I can lamely conclude is my theory of the day:

Life is something else, it just keeps moving forward, and there’s nothing we observers can do about it except keep observing or look away.

Email ThisBlogThis!Share to TwitterShare to FacebookShare to Pinterest
Labels: boxing, Dougable, Mike Tyson
Older Post Home
Welcome home to YesDoug.com.Thanks to your support, I have reached millions of people across America through newspapers, podcasts, TV, and radio, such as The Chicago Sun-Times, “Good Morning America” and “Marketplace.” I’ve interviewed idols like Prince and celebrities like Kim Kardashian. I’ve introduced you to the best travel, TV, movies, music, and games. And I’ve raised money to help feed the hungry and shelter families.
YesDoug.com (via Patreon) is where I explore stories and columns for you personally as an award-winning journalist. Come with me and discover more satisfying entertainment, travel, hotels, shopping, restaurants, excursions, secrets, confessions, memoirs, motivations, and shareable pleasures.I’m creating exclusives directly for you for FREE. But there’s more.BECOME A PATRON — It’s the best way for you to unlock private personal messages.Are you all about business? Stand out as a SPONSOR and update my friends, fans and followers with your linked partner message, so they know who’s on their side.Are we friends? Oh yes we are.Like. Share. Support.
Love Doug