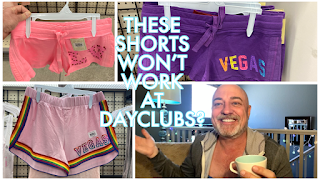 If I look like I’m hungover today, it’s because I am. I do not feel like my best. I’m dragging ass a little bit.

What did I do yesterday?

I went down to the Strip. I got on the Summerlin Parkway, which people are trying to murder you, because all these Californians have moved here and they drive, you know, 100 miles an hour, and they come up right behind your car, and they have all this time to get around you, but they drive up right behind you and at the last second the try to: just don’t hit your bumper.

That’s the game. That is the game the speeders of Las Vegas do.

So I went down to the Strip to meet people at a dayclub that I’m not gonna mention the name of. I found a place I could park for free.

So I go over to the dayclub and I go: knock knock knock, I want to get into this dayclub.

And they go: you can’t get in because you’re wearing pants.

Now this is my fault. I’m not sure I have ever tried to get into a dayclub with pants.

But I’d gone on the website and they didn’t say I needed to wear shorts so I was like, meh, maybe they will let me in.

I didn’t want to be like: don’t you know who I am? Because that’s crappy. But I did say: hey, let me ask you something, so I am a celebrity journalist and I’ve interviewed celebrities at this exact dayclub in the past, and I’m coming here to meet some millionaires.

(I’m not gonna tell you the names of these millionaires, because that’s just tough titty.)

So I messaged the millionaires and they came up, and then they go: hey we are millionaires, can you let this journalist in?

And that’s not gonna happen.

And my millionaire buddies are like: hey I’ve got shorts in the hotel and we can pay for your shorts.

I go out and there’s a Target out on the Strip. So I go to the Target. I find some shorts. I come back to the dayclub. And I go to the bathroom, and I take down my beautiful pants, and I put on my beautiful new board shorts — because they told me, you can't just come back in shorts, you have to come back in board shorts! Meanwhile, the club is about to close, like, I got there late. So I put on my shorts, I go back, they’ve shut the door, I go around to the exit, and there’s only 15 minutes that the dayclub is going to be open, but I’ve spent pretty much close to two hours trying to get into the club, between driving on Summerlin Parkway where everyone’s trying to murder you, and then getting a parking space, and then walking to the dayclub, and then getting turned down, and dealing with the people, and talking to my millionaire friends, and walking to Target, and then getting the fucking board shorts, and then walking back to the club, and putting on the board shorts, and then going to the club … and the club is only gonna be open for 15 more minutes.

So they go: let me check all your pockets.

I pull out all my stuff and I show them all the stuff. I’ve got this microphone for interviews, it’s a very professional microphone. I’ve got my video equipment. They don’t care about that. They’re cool with that.

Then I get to the bottom of all the stuff that’s in my pockets and they find my weed!

Yes I had weed.

I brought my weed pipe with a little bit of weed. I used to have a medical marijuana card, because I get migraines. I get ocular migraines. I don’t get a lot of pain. I just go kind of blind for 10 minutes. It happens a couple of times a year. It kind of sucks. I had three recently on a trip to Arkansas.

So they go: you can’t go in with this weed. Because there’s a federal thing on weed, or whatever.

So I guess at this point it’s a federal government thing. Weed needs to get legalized nationally.

Here’s the other thing. Every single place on the Las Vegas Strip that sells alcohol should also be allowed to sell weed and let people smoke weed, or if not smoke it then vape it, or smoke it in a lounge someplace. Already, you can take edibles in.

What I’m getting at is, Las Vegas is going to have these marijuana lounges by the end of the year. This whole anti-weed thing is ridiculous. There are a lot of tourists buying weed from dealers who are illegal on the Strip, because they don’t want to take a fucking Uber or a cab or a Lyft to a dispensary to go buy weed, because let’s say you’re in Mandalay Bay and you want weed, are you really gonna fucking go: I guess I’ll get in a cab and go to a dispensary and hand over my driver’s license and worry that you’re going to lose my job in Missouri or wherever the fuck I’m a tourist from?

But the thing is, if you're a tourist, you want that weed pronto. So who are you going to buy it from? You’re gonna buy it from some doofus who just has some in his pocket. But if you are at a hotel, think of all that money you’re losing.

So I go like: you guys are crazy not letting me in with this weed … even though I know better.

So the millionaires come and find me. These are millionaire tourists who spent a fortune buying a cabana or whatever the fuck in this club, but millions of dollars and buying stuff doesn’t go as far as you’d think it goes anymore.

Now in the old days — as in, I don’t know, a year or two ago — you sit at a table, a cocktail waitress would come up, and they ask you for your order, and you get some drinks. Sounds reasonable.

I just took the lead as a local and I go: well how do we make a reservation, can we just do it through you?

There are empty tables aplenty.

So she goes: you can do it on our website.

So we have some millionaires sitting at a table. We’re sitting at an open table, but they won’t let us buy anything or give them money or a corporate credit card unless we pull our phone out, go on the website …? Like, what?

So we go: this is ridiculous, let’s go somewhere else.

So we go up. Five of us. We go up to this bar and I said something to the effect of: can we give you money for alcohol?

Beautiful people in swimwear who aren’t allowed to purchase drinks with millionaires in a bar in Las Vegas.

I go: I know exactly where to go.

So we go to the front bar at the Cosmopolitan — and again everybody’s very nice, I have nobody to complain about — and one of the beers we want is called Fat Tire, and they don’t have any Fat Tire.

… I think it’s because Vegas has gotten so insanely busy …

So here’s the other thing. Today I’m recording this on Saturday. Last night was First Friday in downtown Las Vegas. Once a month, we have First Friday and a bunch of artists and a whole shitton of people go down there.

So I say goodbye to my millionaire friends, I get in my car, I drive downtown.

And there are, I’m guessing, 9,000 cars just circling for spaces. All the lots are full. All the spaces are full. The only space I could find was in front of a homeless encampment, but then people were parking in front of that too.

So I go drive to the super secret spot about 15 minutes away from downtown, and I park there, and I park in a spot, and I get out of my little electric car, and I hit the little beep-beep lock button, and I look over to the car on my left, and I see the driver’s side has a little sticker on it that says: you have to move this car or we’re going to tow it.

So I’m reading it and reading it: what does the sticker say? Does this mean my car is going to get the sticker on it? Because I don’t want to take this sticker off my windshield.

And then all of a sudden, this guy pops up in the driver seat!

He thinks I’m the cops. I’m not the cops.

I walked downtown and it’s bananas. I meet my friends at some bar and it’s outrageous. There are 800 million people downtown. Just a crush. Downtown Las Vegas has opened up 500 bars in the last one minute. I’m exaggerating for comedy, but it’s bars everywhere.

One of these bars is next to a halfway house, by the way.

So I meet my friends and we barhop, and it was great.

So I guess the moral I’m getting to is:

Vegas has gotten super crazy, super fucking bananas crazy. If you’re gonna travel as a tourist here now, do it, come give us all your money, we’ll take it all. We love taking people‘s money for any reason whatsoever.

If you’re at a hotel, maybe you could come up with a way for millionaires and middle-class people and poor people to be able to give you money for alcohol? And hopefully weed at some point? Because come on, dude, you smell it all over the place, and hotels are missing out.

So that is my true tale of joy and woe today.

I hope you’re having the best day of your life.

Posted by Douglas Elfman at 4:30 PM

Email ThisBlogThis!Share to TwitterShare to FacebookShare to Pinterest
Labels: clubbing, Dayclub, Doug Elfman, Dougable, first Friday, holiday, Las Vegas, partying, tourism, travel
Newer Post Older Post Home
Welcome home to YesDoug.com.Thanks to your support, I have reached millions of people across America through newspapers, podcasts, TV, and radio, such as The Chicago Sun-Times, “Good Morning America” and “Marketplace.” I’ve interviewed idols like Prince and celebrities like Kim Kardashian. I’ve introduced you to the best travel, TV, movies, music, and games. And I’ve raised money to help feed the hungry and shelter families.
YesDoug.com (via Patreon) is where I explore stories and columns for you personally as an award-winning journalist. Come with me and discover more satisfying entertainment, travel, hotels, shopping, restaurants, excursions, secrets, confessions, memoirs, motivations, and shareable pleasures.I’m creating exclusives directly for you for FREE. But there’s more.BECOME A PATRON — It’s the best way for you to unlock private personal messages.Are you all about business? Stand out as a SPONSOR and update my friends, fans and followers with your linked partner message, so they know who’s on their side.Are we friends? Oh yes we are.Like. Share. Support.
Love Doug